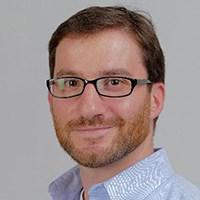 Josh Land, a longtime Baltimore-Washington area journalist and a 2004 graduate of the Philip Merrill College of Journalism, became the school's communications manager in 2019.

Land is responsible for the college’s communications and marketing strategy, including its publications, website and social media accounts.

Land was previously the senior sports editor at The Baltimore Sun, where he led a staff of 15 writers and editors in producing award-winning digital and print coverage of professional, college and high school sports.

He joined The Sun in 2015 to direct the news organization’s coverage of the Baltimore Orioles and Major League Baseball.

Before that, he was deputy managing editor for baseball coverage and lead writer covering the NFL’s Baltimore Ravens at MASNsports.com, the news website attached to the regional television network co-owned by the Orioles and Washington Nationals.

Land started his journalism career as a reporter at the Carroll County Times in Westminster, Maryland, where he covered the Orioles and the Maryland football and basketball teams from 2004-12.