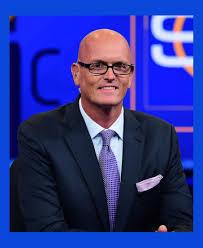 Scott Van Pelt is host of the midnight edition of SportsCenter, bringing his unique perspective to the world of sports since September 7, 2015. In addition, Van Pelt contributes to ESPN’s telecasts of the Masters and The Open, two of professional golf’s majors, as both an anchor and hole announcer. He also hosts SportsCenter reports and specials from events. Van Pelt joined ESPN in early 2001 as the network’s lead professional golf reporter, shortly thereafter becoming a SportsCenter anchor and later a co-host on ESPN Radio of Tirico and Van Pelt each weekday afternoon.

Van Pelt came to ESPN from The Golf Channel, where he was an anchor and reporter for the sport-specific network from 1994-2000. During his years there, he was the co-host of studio programs Golf Central, Leaderboard Report and occasional host of Viewer’s Forum. A native of Brookville, Md., Van Pelt graduated from the University of Maryland with a bachelor’s degree in radio/television and film. He is proud of his Maryland Terrapins sports teams and often attends games as a spectator when his schedule permits.