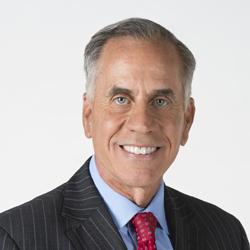 Tim Kurkjian is a baseball writer, analyst, host and reporter for ESPN TV and the Emmy award-winning ESPN productions Baseball Tonight and SportsCenter.  Tim is an analyst in the booth for Monday Night Baseball. He is a senior writer ESPN.com.Tim has been covering major league baseball for 40 years, 10 as a beat writer for three different newspapers, then eight years as a senior writer for Sports Illustrated before joining ESPN in 1998.  Tim authored his first book, America’s Game, in 2000.  His second book, Is This a Great Game or What? was released in 2007. His third book, I’m Fascinated By Sacrifice Flies was released in 2016, it made the New York Times Best Seller list. Tim is a member of the Baseball Writer’s Association of America, which entitles him to vote annually on Baseball Hall of Fame inductions.

Tim grew up in Bethesda, Maryland and attended Walter Johnson High School, named for the great Washington Senators pitcher.  He graduated from the University of Maryland with a BS in journalism in 1978.  Tim currently resides in Darnestown, Maryland with his wife, Kathy, and two children, Kelly and Jeffrey.