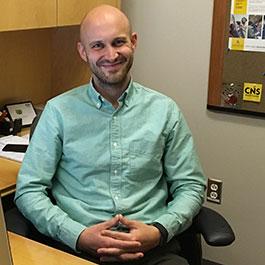 Alexander Pyles is a Philip Merrill College of Journalism lecturer and director of the audience engagement bureau for Capital News Service, the college’s student-staffed news organization with bureaus and news teams in Annapolis, Baltimore, College Park and Washington, D.C.

He helps student journalists use metrics, social media and other digital storytelling tools to maximize the audience for projects published by CNS and the Howard Center for Investigative Journalism. He also teaches related courses on interactive design and social media strategy.

Previously, he was a reporter and editor for several news organizations.

Prior to that, Pyles was The (Maryland) Daily Record‘s State House reporter; a reporter, editor and photojournalist for AOL’s Patch.com; and a sportswriter for The (Wilmington, Del.) News Journal, CBS Sports, Inside Lacrosse and other publications.

Pyles holds a master’s degree in journalism from Merrill College and bachelor’s degrees in English and media and communication studies from UMBC.